I don’t know what your neighborhood looks like during the Halloween festivities. Some of the houses around mine go all-out.

This huge spidey and web thing is one block from out house. Only one comment is suitable: eek!! 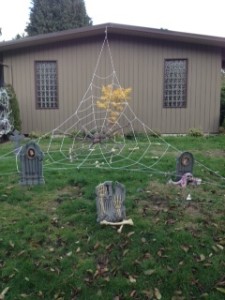 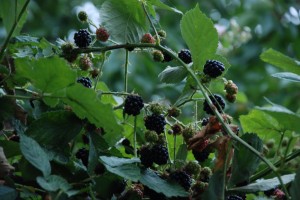 Here in the Pacific Northwest, blackberries are still abundant. My favorite time for picking is late in the afternoon. I take a bowl with me and do my best to fill it.

But it’s September and spiders are also abundant. 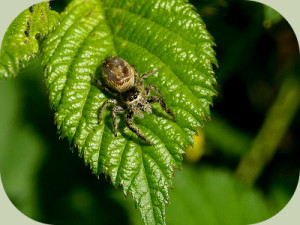 Many of them spin webs among the blackberry bushes. I have a healthy respect for these critters, who do an admirable job of killing many kinds of pesky insects. But I also prefer to steer clear of them.

The other day, I was out, doing picking thing, and doing my best to avoid the spiders and their webs. I admit that I was distracted with a novel I’m plotting, but I was careful.  Suddenly, something whizzed up, so quickly, it was a blur, and bit the flesh just above my elbow. “Ouch!” I said.

I spotted what looked like a bee (but is actually a fly), but they can’t sting. So what was it? To my relief, the sting lasted all of 5 seconds before it faded into oblivion. No red spot or itching, either.

I returned to my picking, and figured out some cool stuff for the story. Suddenly it happened again–a blur and a sting, this time in the vee between my second and third finger. “Ouch!” Wouldn’t you know, I was so startled that I upended the bowl and I lost a good half the berries.

Then I saw it–a spider dangling from a single thread, attached to the outside bottom of my bowl. Shrieking, I spun around a couple of times, until the thread snapped.  I’m sure if anyone had seen, they would have questioned my sanity.

At which point the spider went on his or her way and I went on mine. In opposite directions. Phew!

Until Wednesday, and wishing you a spider-free day,