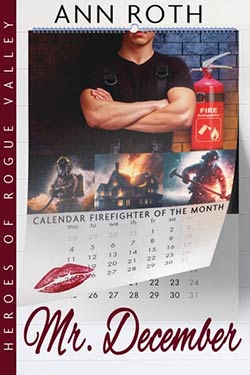 Hurt by family betrayals, firefighter Liam Gibson doesn’t trust easily. The one time he let his guard down, photographer Grace Camry stole his heart. Liam intended to spend the rest of their lives together, until the unexpected death of Grace’s father changed everything. Although Liam still harbors feelings for Grace, when she walked away without an explanation she shattered his trust.

Dad wasn’t the man he seemed, and his lies and secrets almost destroyed Grace. Fearing the damage the truth would cause Liam, she ended the relationship. Yet she never stopped loving the firefighter with the big heart and amazing smile. Without him, her life seems colorless and empty.

Soon a holiday party for families in need will force them to work together and maintain a cordial front for the greater good. Will the past keep them apart, or will the magic of Christmas open their hearts to forgiveness and a new beginning?

Love it
Liam had love then lost it and she hurt his heart and his trust he doesn't know if he will be the same.
Grace loves Liam with all of her heart but when her dad passes she knows she had to leave to protect Liam from what she realizes her dad really was.
These two now have to work together and this just might make them both realize that they need to grab onto the good stuff so the bad can not keep them down.

#WILLKEEPYOUWARMFORTHEHOLLIDAYS
Though Mr. December is a short(ish) read, I still loved every minute of it, and while I would have loved to keep reading about these two, I didn't feel like it was too rushed either. Grace Camry & Liam Gibson were in relationship that was almost perfect, and was on it's way to being forever, when her father died. That led to Grace breaking up with Liam without a proper explanation, and he really never got over her, however, she shattered his trust completely. It affected her badly as well, because she never stopped loving him for even a second, but she couldn't go back there. Now months later, he decides that they need to clear the air a bit in order to be polite with each other, since they are working together to put on a holiday party for kids in need. And this leads to feelings coming back to the surface, but will Liam ever be able to forgive Grace? Yeah, this story had all kinds of feels going on, and while I could feel Liam's pain, he did piss me off more than once, because at times, he just couldn't get past his own hurt to really look at Grace, and see there was something more going on. And when she finally decided to be truthful with him, yeah, still only worried about himself. Thankfully, there were a couple of secondaries who could see past things, and didn't hold back, whether Grace and/or Liam listened to them or not. And obviously, what Grace was holding on to was that whole twist that came out (since secrets don't make friends) to allow us readers to drop f-bombs about. So yeah, the talented Ann Roth definitely penned a Holiday story that ticked off all my boxes, and I HIGHLY HIGHLY HIGHLY RECOMMEND TO ALL!

Awesome Book
I have yet to read the other books in this series, but this one was an awesome read!