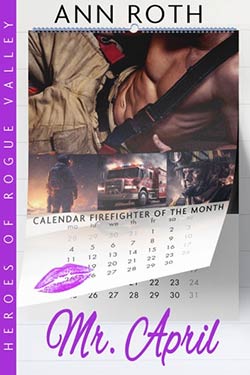 When firefighter Owen Ayers allows freelance writer Hallie Sawyer to shadow him for her Guff's Lake Fire Department magazine article, the normally easy task proves challenging instead. Jaded by his failed marriage and wary of getting involved, Owen is irresistibly drawn to Hallie. Shattered after the unimaginable death of her fiancé and the miscarriage that followed, Hallie is slowly rebuilding her life and focusing on her career. But smart, sexy Owen threatens to breach her protective shell. The healing power of love just might save them both.

Heartbreak support
Trying to be independent from her family after two devastating tragedies upended her life, Hallie has forged a new life as a freelance writer. Her newest assignment is to write about the local fire department. She is assigned a firefighter to shadow. He turns out to be a high school crush and Mr. April in the firemen calendar. Owen is also recovering from a different type of tragedy. Can these two see their way to overcoming their hurts and doubts to have a HEA?
A well written romance which had me not putting it down until I finished.
Hallie's tragedies are heartbreaking, but Ann creates a strong character who perseveres to overcome her heartbreak. Owen is finding out with the right person anything is possible!

A great read
A great, warm hearted read, with really likable characters. This is a great standalone book, but it brings in the other books characters enough that if you have read them, you will recognize them. I also like that each book of different and not a copy of the previous book with new names.